There's something exciting about visiting the world's great universities. It could be because I'm a nerd who gets overwhelmed by all the great minds who've studied there, or perhaps it's because it brings back sordid fictional moments. Each campus based book I've read has dished out the perfect dose of intrigue. Universities offer just the right setting for writers looking for spooky corners in old buildings for their characters to chance upon a mysterious book or conduct a secret love affair.

Yesterday I visited Harvard University in Cambridge Massachussetts, which boasts two of the most fabulous bookshops I've ever encountered. I'll do a follow up post with some pictures tomorrow.

The prestigious college got me thinking though, about my favourite novels set at or defined by university. Here are five of them. 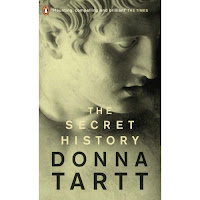 The Secret History by Donna Tartt

The Secret History is dripping with every imaginable sin: murder, bacchanalia, greed and gluttony. Richard Papen has come to fictional Hampden College in Vermont (based on Tartt's alma mater Bennington College) on a scholarship and is desperate to ingratiate himself into an exclusive group of Classics students. When he finds his opening he becomes involved in a killing that rents apart their relationships with one another. Just writing about it makes me crave the story again.

Waugh examines the decay of the English upper class by training his microscope on Charles Ryder, now a British army captain whose unit sets up camp at Brideshead in the 1940s. The run down old mansion was once the home of his closest friend, the erratic Sebastian Flyte. Charles flashes back to their days at Oxford and the tragic turns their lives have taken since.

The Stranger's Child by Alan Hollinghurst

There are numerous tributes to Brideshead Revisited in Hollinghurst's latest novel. It begins with a dinner at Two Acres, the run down old home of Cambridge man George Sawle, who has returned with his friend Cecil Valance for the holidays. The pair are friends "in the Cambridge way"and while the novel isn't explicitly set at the university, its legacy permeates the story which jumps from pre WWI to the present day.

White Noise is a masterpiece of postmodern satire. Set in a small mid-western American town, college professor Jack Gladley is the originator of Hitler Studies in North America, despite being a non-German speaker. He and his wife Babette's obsession with death culminates when they're caught up in an "air born toxic event," the symptoms of which include sweaty palms and episodes of deja vu.

The Historian by Elizabeth Kostova

Kostova's original rendering of the Dracula tale (a father and daughter pursue the vampire through Eastern Europe) is all it should be - suspenseful, spine tingly and unreadable at night (too spooky). Some of its most memorable scenes occur in the libraries at Oxford and Harvard respectively. This is another book you'll find yourself obsessively re-reading.

Have you got any campus based books to add to my list?
Posted by Amy Roil at 1:40 AM