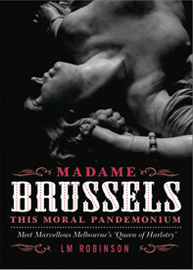 There’s a feeling of disconnect when you move countries (albeit just across the ditch). Like you’re looking at everything through a haze of untunable static. The food is the same, the language is virtually the same, but the political system is indecipherable, and it’s impossible to tell which are the good radio stations.

Luckily, the Wheeler Centre, which I discovered on arrival to Melbourne nearly two years ago, showed me at least part of what makes this city’s heart beat. At the first event I attended (entitled Reading the City: Historians on Melbourne) I became captivated by one of its most fascinating creatures, stalwart of the sex industry of yore, Madame Brussels.

Speaker LM Robinson, who authored Madame Brussels: This Moral Pandemonium opened Melbourne up for me. While researching her book she would stand, eyes closed in little Lonsdale Street listening to the still ubiquitous clop clop of horses hooves, imagining the stench of the fish markets and unwashed bodies of a century ago, before her not a high-rise teflonesque office block, but a pretty villa with wrought iron fencing.

Since then I’ve been desperate in my search of the Madame Brussels biography, finally stumbling across it in a Fitzroy shop last month. The friends I was with laughed at what must have looked like disproportionate excitement at this pocket sized design feat. Published by Arcade Publications it’s attractive as much for its pretty illustrations, antique photographs, and faded pink pages as it is for its fascinating content. The patterned pages at front and back emulate the wallpaper that would’ve undoubtedly lavished Caroline Hodgson’s opulent brothel at 32 Lonsdale Street, and the font and provocative nude on the cover give the book an air of debauchery not unlike that of its subject matter.

Robinson’s extraordinary tale of ‘Marvellous Melbourne’s most infamous madam,’ whose real name, Caroline Hodgson, belies her sordid career, is impeccably researched and bewitchingly written. She harnesses the rhetoric of the day to conjure a ‘metropolis of colonial whoredom and licentiousness,’ which evangelist Henry Varley hoped to wipe out in his campaign against Melbourne’s “Queen of Harlotry.” As Madame Brussels’ most ardent critic, he was out to save the lucrative maiden virtue of her flash girls, whom she paraded through city streets for the benefit of the highest bidder.

From naked nymphs in the brothel’s walled garden to the scandal surrounding the theft of the Victorian parliamentary mace (missing to this day), it’s a book that reveals as much about the attitudes and goings on of the time (during the prosperous gold rush years) as it does about Hodgson herself. Robinson trawled through mountains of documents to piece together the madam’s life, but facts can only take us so far. We’re left speculating about the real Caroline Hodgson: ‘the Madame’s story is one of fragments – each inhabited by a question mark, all gesturing towards a multitude of intriguing possibilities.” It’s obvious she was precocious and determined but what was it like to know her? Was she a fair woman or did she use her girls for her own gain? Was she liked or feared by those closest to her? The door is open for a fictional account of her life.

In her prologue LM Robinson writes: “Melbourne, it seemed, would rather forget the once notorious ‘Princess of Procuresses.’” Hopefully Madame Brussels: This Moral Pandemonium will encourage the city to start remembering the intriguing brothel keeper for more than just a cocktail lounge that bears her name.