Stieg and Me: Eva Gabrielsson's Tale 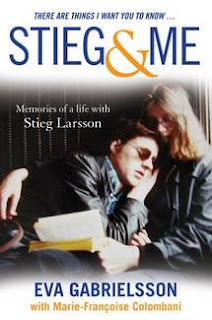 Steely determination shines from Eva Gabrielsson’s mild grey eyes as she sits decorously dressed in black, a light green scarf thrown casually across her shoulders. Those eyes are the only hint that this softly spoken 57 year old is a fierce fighter of injustice, who would unhesitatingly invoke an ancient Viking curse on you if you happened to cross her.
She is a guest of Melbourne’s Wheeler Centre, here to promote her new book “Stieg and Me.” Hers is a story that wouldn’t look amiss in one of partner Stieg Larsson’s Millenium Trilogy novels.  The pair had been together for 32 years when he died suddenly of a heart attack in 2004, before seeing any of his books published. His death withered the couple’s dreams of a modest future together where they could finally pursue the work they loved without the financial burden they had carried with them for so long.
It also provoked a bitter battle between Eva and Stieg’s family who seized tight control of his estate, despite having little to do with him in life. Under Swedish law, childless de facto couples have no legal grounds to inherit when one partner dies. Despite her close collaboration with Stieg on the novels Gabrielsson has lost control of his literary works and says she must watch helplessly as his family exploits his name for profit.
Speaking to John Faine at the Wheeler Centre, she says one of the most frustrating things about watching the way Stieg’s father and brother are handling the success of the novels is the way the translations have been let go: “I just look at the first page in the English version to see this childish title [The Girl with The Dragon Tattoo]. Stieg fought hard in Sweden for the title Men Who Hate Women. His publishers said it wasn’t commercial enough, but he insisted.”
Stieg’s ardent feminism is a theme she comes back to often in her book and she says everything that happens in the Millenium novels is based on true events. She’s puzzled about the world’s idealisation of Sweden, saying her country shares the same problems as everyone else. She’s pleased the novels keep issues like violence against women and corruption firmly at the forefront of readers’ minds, especially because they’re causes Stieg fought for until death.
The book itself is not a bad read, but it delivers frustratingly little insight into Stieg’s life. There is nothing in there that couldn’t have been gleaned from other sources. Gabrielsson also spends far too much time describing how the details of the Millenium books relate to the life she and Stieg shared. The coffee shop Mikael Blomkvist frequents is the one they too loved, the couple jointly chose the location of Blomkvist and Lisbeth Salander’s respective apartments, and many of the characters in the novels are their real-life friends. These details may interest die-hard fans, but they get in the way of the real back-story. At the beginning Gabrielsson writes: “The Stieg of the Millenium industry doesn’t interest me. The one I care about is my life partner and my ally in everything…the journalist, the feminist, the militant.” And yet so much of the memoir fixates on these books.
What is fascinating is Gabrielsson’s discussion of Stieg’s absolute commitment to exposing the agendas of Sweden’s Neo Nazis and the subsequent threats on his life. To Faine she says: “I expected him to die in the 1990s, to be shot or pushed in front of a train or something. I feared for his life all of the time.” She expands in her book detailing how the extreme right wing magazine Storm published Stieg’s photo, his phone number and his home and business addresses because they were angry about what he was writing about them in Expo, the real-life version of “Millenium” magazine. Stieg would receive anonymous phonecalls, and bullets in the mail; friends were killed.
After Stieg’s death Eva felt such rage at those people who added to his “deadly exhaustion” in life that she conducted a ceremony and invoked a Nordic curse on his enemies. Matter of factly, she tells John Faine that the curse has worked: “people have gone to prison, bad things have happened, someone died.” But she stresses that the curse will end if those people give up their wicked ways. It all seems rather frightening coming from a woman who looks so darned nice.
Eva says talks with Stieg’s family have now broken down and she’s decided to “carve my own way through this mess.” Part of that is bringing out her book. She says she’ll continue her fight for Stieg because "he wouldn’t have expected anything less." When it comes to revenge, Lisbeth Salander may just have herself a rival.
Posted by Amy Roil at 9:36 PM