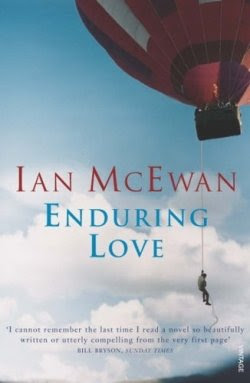 Ian McEwan again takes a chance event and holds his microscope to “the explosion of consequences” that ensues. In A Child in Time, Kate’s disappearance from the supermarket spirals her parents’ lives into turmoil, while Briony’s lie in Atonement alters the fates of all it affects. Here, a ballooning accident is the scene-setter for a series of occurrences that tears to shreds the relationship between Joe Rose and his partner Clarissa.

He is a middle-aged science writer, she, a Keats scholar. Deeply in love and living a comfortable life together, they’re thrown by chance into the midst of catastrophe. As a hot air balloon founders in a gusty field Joe is one of five men who run to its anchor. The tragedy that follows torments those involved. For Jean it’s an obsessive ‘was my dead husband having an affair?’ For Joe: ‘who let go of the rope first, and could a man’s life have been saved had I held on?’ And Jed Parry, loner and fellow helper, is struck down by love: “Something passed between us, up there on the hill, after he fell. It was pure energy, pure light?”

Jed’s adoration for Joe, and his belief in its reciprocation, is cloying and manic, and completely of his imagination. Joe too is fixated, not only with absolving his guilt over the accident, but also with keeping Parry at bay. He’s convinced Jed will become violent; he pesters the police to restrain him and discusses the man’s advances over and over with Clarissa. Neither party takes his claims seriously and Joe’s wild and irrational tone as the novel wears on is enough to convince us his mind is failing. It’s a conviction that’s foreshadowed while their love is still strong:
“‘I love you more now I’ve seen you go completely mad’ she said. ‘The rationalist cracks at last!’
‘It’s just the beginning’ I promised. ‘Stick around’”
Joe’s position as a rationalist, and his exploration of human instinct simply compounds the notion that he is the crazy one.

In fact, the unreliability of memory and perception permeates the book. Joe’s first person account of Jed’s stalking is at great odds with Clarissa’s version of events, both in his imagined description of her view, and her letter to him after the novel’s shocking climax. In his own writing Joe discusses consciousness and memory in animals, and evolutionary amnesia - most especially the jolt of love and surprise every time he sees Clarissa: “Perhaps such amnesia is functional – those who could not wrench their hearts and minds from their loved ones were doomed to fail in life’s struggles and left no genetic footprints.” Yet despite his scientific nous, he fails to see that his own memories could be flawed: “I have no doubt that I remember his words correctly.” What is the reader to make of Joe’s account when we’re given proof (with a discussion over the flavour of ice-cream following a restaurant shooting) that his memory is as bad as anyone’s?

McEwan forces us to explore the reliability of the first person narrative while he revels in emotional analysis. Like A Child in Time where Stephen and Julie’s despair over their lost child stretches to breaking point their love for one another, Enduring Love explores just how gutsy those who love can be when the object of their affection is either unattainable or slipping irrevocably away. Joe laments the loss of Clarissa as Jed Parry drives a firm wedge between the pair, Clarissa surrounds herself with the children of friends to replace those she can never have herself, and, although spurned, Jed is relentless in his pursuit of Joe.

Enduring Love dives in and wallows in the minds of its characters, grabs their personal bonds and yanks them until they snap. And my, for what enjoyable reading that does make!
Posted by Amy Roil at 1:39 PM