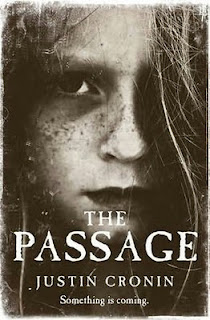 The Passage by Justin Cronin

I am what you could call a Twilight anti-fan. The first film left me cold, and despite constant entreaties from my “Twihard” friends, I refuse to waste valuable reading time on the books. However, I am an unashamed Harry Potter lover and The Hunger Games is quickly moving its way up my list. So after finishing Justin Cronin’s The Passage, I’m amazed it hasn’t occupied the imagination of the zeitgeist in the same way. It’s got all the makings of a media monster (excuse the pun): vampire like beings, an electric plot and loveable characters. And like the aforementioned supernatural/futuristic heavy weights, it’s part of a series so the goodness keeps coming.

Vampire-esque “virals” have virtually wiped out humanity. They’re the result of a U.S government experiment with a new infection discovered in the South American jungle. Hoping to produce indestructible “super humans” invaluable to the country’s security forces, the result is instead, a mass of dark-loving, flesh tearing monsters that feed off warm blood and make every tenth human victim one of their own. Only six-year-old Amy Bellafonte, snatched by the FBI after her mother abandoned her, remains quintessentially human after infection.

First Colony, settled when the outbreak begins, is mankind’s last bastion. Surrounded by high walls and protected from their photophobic nemeses by oversized night-lights, humans have been living here in relative safety for almost 100 years. But the batteries that power the lights are failing and it’s up to the colony’s bravest to save them.

Like father and son in The Road, Cronin’s characters are battling for almost hourly survival on their journey back to the source of the outbreak.  However, while McCarthy’s post apocalypse is so desolate it’s as if one of J.K Rowling’s death eaters has sucked all that is good from the world, Cronin’s is full of promise. There’s hope they’ll come across other humans, hope they’ll find new batteries for the lights, and hope they’ll discover a way to destroy the virals.

McCarthy’s abrasive realism too is lacking. We’re often required to suspend our belief, especially in the action scenes where characters, who realistically, would swiftly cark it from horrific wounds, not only survive, but destroy the baddies with the use of just one arm and a knife. Even when said baddies are creatures who move at the speed of light and possess demonic strength.

But the story isn’t so fanciful that you can’t imagine a similar occurrence. In fact it was sometimes a relief to stop reading and realise I wasn’t in imminent danger of death by viral, so utterly engrossing is Cronin’s prose. The way he presents academic discussion about the outbreak 1000 years hence (like Margaret Atwood’s technique in The Handmaid’s Tale), effectively weights the novel in reality, as well as reassuring us that humanity does make it, although in what form we don’t know.

As for the virals, Cronin explicitly compares his creations to Bram Stoker’s Dracula, when his human characters watch the movie of the same name. During the film, protagonist Peter muses about the similarities between Count Dracula and the virals, namely their shared aversion to light, their immortality and their partiality to human blood. It didn’t resonate with me however. Cronin’s creatures are far more bestial and futuristic than Stoker’s intelligent and charismatic Count. Their glowing eyes, sharp claws and animal instincts are more zombie-like. Although former death row prisoner, and leader of the virals, Babcock, certainly shares Dracula’s purely evil nature, he also resembles Harry Potter’s nemesis Voldemort.

Generally, the idea of reading about a zombie apocalypse doesn’t excite me, so I’m pleased I had little knowledge of what The Passage was about before opening its pages or I would’ve missed a brilliant story. It’s the type that makes you want to pull a sickie to finish and yet you wish it’ll never end.  Justin Cronin is a word-master and suspense building guru, creating a fantastic start that leaves one hanging for the next instalment in the trilogy. Thankfully we don’t have to wait too much longer as the second book is out this year and a movie is on its way.
Posted by Amy Roil at 7:48 PM