Edinburgh's anonymous book sculptor has been at it again.

My dear friend and Edinburghian @aneedlejarowner tells me 10 sculptures have now been found in the city's literary establishments, hidden so well that numbers eight and nine weren't discovered until a hint by the final piece prompted a flurried search.

This gorgeous artist has been delighting people everywhere with her charming works, the first of which, dubbed 'poetree', appeared in the Scottish Poetry Library in March.

Since then, she's deposited a gramophone and a coffin sculpted from Ian Rankin's Exit Music in the National Library of Scotland, left a paper cinema at the Filmhouse, hatched a baby dragon at the Scottish Storytelling Centre, offered a cup of tea and cake to the Book Festival, sent a lost pirate and his island (crafted from The Private Memoirs and Confessions of a Justified Sinner by James Hogg) to UNESCO Edinburgh City of Literature, magnified the expansiveness of the Central Lending Library, brought a Tyrannosaurus Rex to life at The National Museum of Scotland, illuminated an enchanting street scene at the Writer's Museum and left her gloves behind back at the Scottish Poetry Library.

With the final sculpture, an explanation: 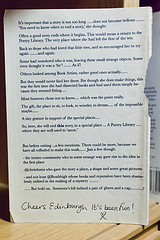 'You need to know when to end a story,' she thought.
Often a good story ends where it begins. This would mean a return to the Poetry Library. The very place where she had left the first of the ten.
Back to those who had loved that little tree, and so encouraged her to try again .......and again.
Some had wondered who it was, leaving these small strange objects. Some even thought it was a 'he'! ....... As if!
......
Most however chose not to know..... which was the point really.
The gift, the place to sit, to look, to wonder, to dream..... of the impossible maybe.......
A tiny gesture in support of the special places.....
So, here, she will end this story, in a special place ... A Poetry Library ..... where they are well used to 'anon.'
She's an Ian Rankin fan: The gramophone and coffin is based on and crafted from Exit Music, he is an audience member in the Filmhouse sculpture, the street scene borrows his quote 'The stories are in the stones' and he is known to be greatly influence by The Private Memoirs and Confessions of a Justified Sinner. She's also passionate about libraries, applauding their influence with each piece.

I do hope the library phantom continues her whimsical crusade.

For details and photos on each piece visit Central Station