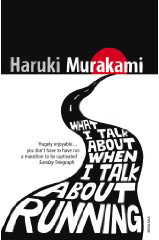 What I talk about when I talk about running by Haruki Murakami
Published by Vintage, 2008
My quads howl as I bend to sit in my sun deluged lounge room corner to type. Running my first half marathon at the weekend, two mantras played on loop in my head: “just keep going” and “never again.”  My thighs feel like someone’s clubbed them to jelly and two toenails are about to fall off. But my resolve to forever swear off another 21 kilometres is slowly dissolving in the wake of a two hour bus trip which passed flash-like, so engrossed was I in Haruki Murakami’s What I Talk About When I Talk About Running. I feel sure fate yanked me to the memoir/biography section at my local bookshop, and forced this book into my hands.
It’s not long (I read it in the aforementioned two hours), but if you’re a runner or a Murakami fan, you will adore it. The author of a raft of excellent novels, including Norwegian Wood, and the about to be released English translation of 1Q84, Murakami began running in 1982 when he was 33 years old, 3 years after he published his first novel. Prior to that he ran a jazz club where notions of neither running nor writing entered his head.
When he eventually gave up the club to hang out his “sign as a novelist,” the inherent slobbish lifestyle of his new career choice weighed on him. He decided to run because, “you don’t have to go to any special place to do it. As long as you have running shoes and a good road you can run to your heart’s content.” At the time of writing Murakami had completed 23 marathons (one per year), one ultra-marathon (100 kilometres) and a number of triathlons.
Don’t expect a memoir of the traditional kind. This is purely about Murakami the runner, who has a fundamental connection to Murakami the author. The book anchors on his training schedule for the 2005 New York marathon, flitting back and forth with fascinating anecdotes galore. He tells of his first marathon, from Athens to the town of Marathon in searing heat in a backwards replication of the penultimate 42 kilometre run. His pure willpower and ultimate transcendence to run 100 kilometres in the ultra-marathon certainly puts a mere 21 kilometres to shame.
The challenge to keep up his running schedule in the face of his hectic writing, promoting and speaking responsibilities, grappling with motivation levels, and difficulty maintaining his times as he gets older are issues that’ll reverberate with many runners. Indeed, the memoir is so fascinating because you identify with Murakami, yet he is so utterly inspiring at the same time. His writing style isn’t masterpiece material, but his prose is simple and elegant and if you’re interested in the subject matter you’ll struggle not to whip through What I Talk About When I Talk About Running. Once those toenails grow back, I may just keep going after all.
Posted by Amy Roil at 12:47 PM