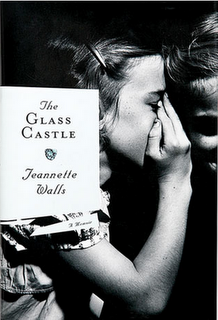 The Glass Castle by Jeannette Walls
Jeannette Walls is a successful journalist who regularly rubs shoulders with New York’s glitterati. When her memoir begins she’s living in a flat on up market Park Avenue about to attend an exclusive red carpet event.  But her privileged life belies an impoverished background spent scavenging for food in school garbage bins, sleeping in cardboard boxes and fending off child welfare officers intent on splitting up her family.
In fact, Walls’ childhood is so unusual there’s no way it could’ve been imagined. Her family lives a nomadic existence, regularly packing up and moving out when the going gets hot (her father tells her it’s to escape the “FBI”), often in the middle of the night. From Phoenix, to California, to West Virginia, Jeanette’s parents convince her and her three siblings that they’re on a glorious cross-country adventure. They sleep under the stars, are perpetually forced to abandon favourite toys and rarely know where the next meal is coming from. But despite a lack of routine and proper schooling, all four children are keenly intelligent, following in the footsteps of their crazy yet very on to it parents.
Although her story is shocking, Walls doesn’t invite sympathy with her telling. There’s no exploration of why her father struggles with alcohol, why her mother hates authority, or why both insist on living on the streets. It’s the only life she knows and she’s matter of fact about it. However, as the memoir evolves it becomes clear that Walls is searching for an answer to her parents’ way of being. Although let down by them countless times, the endless forgiveness she shows her folks both as child and adult is a touching lesson about the unbreakable bonds of family. Ultimately she accepts them for who they are and asks the reader to do the same.
The story is so compelling it’d be a page-turner even without Walls’ brilliant prose. But thankfully we’re spoiled with both. At once heart wrenching and hilarious, The Glass Castle will have you up until midnight begging: “just one more chapter.”